Song of the Sea – an Animated Magical Irish Tale 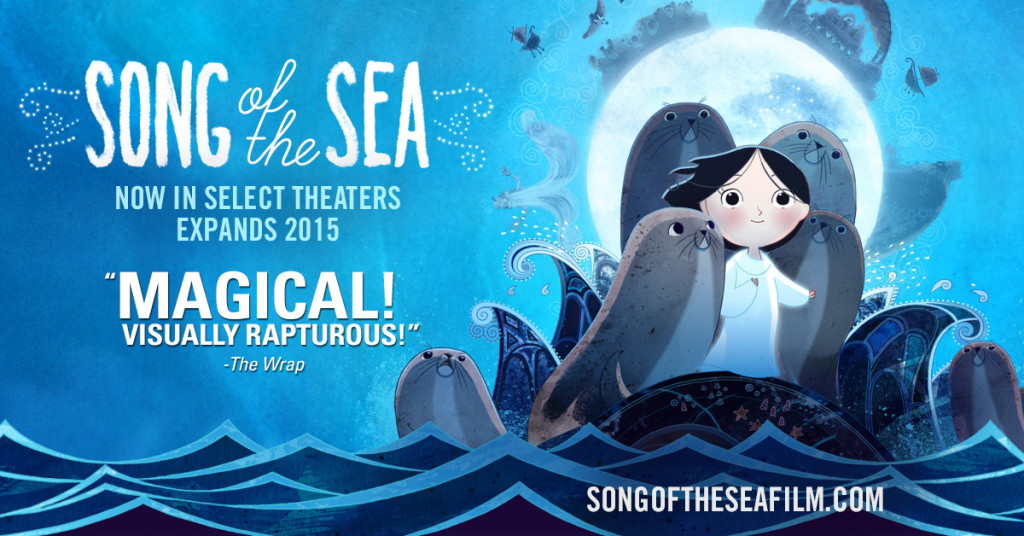 Last Sunday I finally had the chance to go see Tomm Moore’s Song of the Sea, the Irish hand-drawn animation who was nominated for the 2015 Academy Awards for Best Animated film. Tomm Moore is also known as the director of The Secret of Kells , an animated film about the wonderful book now kept at the Trinity College’s Long Library in Dublin. Miss I, my 6 year-old daughter, had already seen the film, and she had been singing the lullaby that is featured in the story for a week solid.

The film is about a little 6 year-old girl called Saoirse, who lost her Mother the day she was born. Both her Father and her Brother resent the young girl for the loss. Brought up in shared solitude, Saoirse grows fascinated by the sea — the family lives in a lighthouse by the shore. She has never spoken a single word. On her 6th birthday she finds a magical coat hidden in her father’s closet, guided to it by glowing sprites — it is then that is revealed she actually is a Selkie, a mythical creature that transforms into a seal. After she is found covered in the coat and drenched by the shore, the Father sends the two children to live with their Grandmother in the city — he’s afraid to loose them, so he sends far from the ocean.

Song of the Sea is a story about loss, coming to terms with grief and being able to move on. The wonderful visual journey into this mystical Irish folk tale is haunting and deeply moving. The music is evocative and lends the story a faerie-tale touch. I saw the film with my 6 year-old and a friend who’s 5, and both girls were captivated by the world, the artistry of the drawings and the touching story. It really is art in movement, and reminded me a lot of Hadeo Miyazaki’s films (Spirited Away, Howl’s Moving Castle, Castle in the Sky), but done with a much more European art style. There are details of the Irish Celt tradition in every frame.

Song of the Sea has been opening all throughout the US and Canada, and you can find their release schedule here. I, for one, can’t wait until the movie is available in Bluray to get it.

Here’s the trailer for Song of the Sea.