Movie Class – The Storyboard, or How to Tell a Story Visually

What is a Storyboard?

This past Movie Class, I told the kids they were ready for the next step: storyboarding. Once they had their scripts finished with action and dialogue, we moved on to the visualizing of the film, and working out the details of their stories. In order to plan what we need to do for the actual shoot, I wanted them to first put in paper what they were “seeing” when they were telling their stories. To do so, in film we usually do a Storyboard, which is breaking down the story in images. Every time a shot changes size or location, we draw a different image.The drawings don’t need to be very good nor very detailed — stick figures to see position of people and items, as well as frame sizes, are just enough. That’s the way I’ve done several shorts and a feature.

First, I showed them an example of how to do a Storyboard, with a scene of a movie they all knew: Disney’s Alice in Wonderland. Here’s a page I found on a storyboarding site: 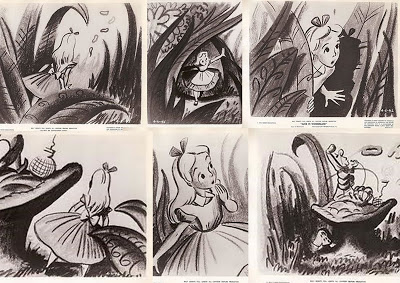 Next I showed them the actual scene in the movie, to make it clear that every time we change the camera angle or shot size, we need a new picture. Armed with this, a few storyboard template pages, their pencils, and couple of comic books as reference, they all set to work.

JS was the one who took the longest, as his script is 3 pages long. His Storyboard was also 3 pages long, but I only included here 2 of them (the last page is also all in Close Ups). He is doing a story set in Word World, where Duck, Dog and Pig want to play football — but when they get to the field, it had rained and it is all muddied up. 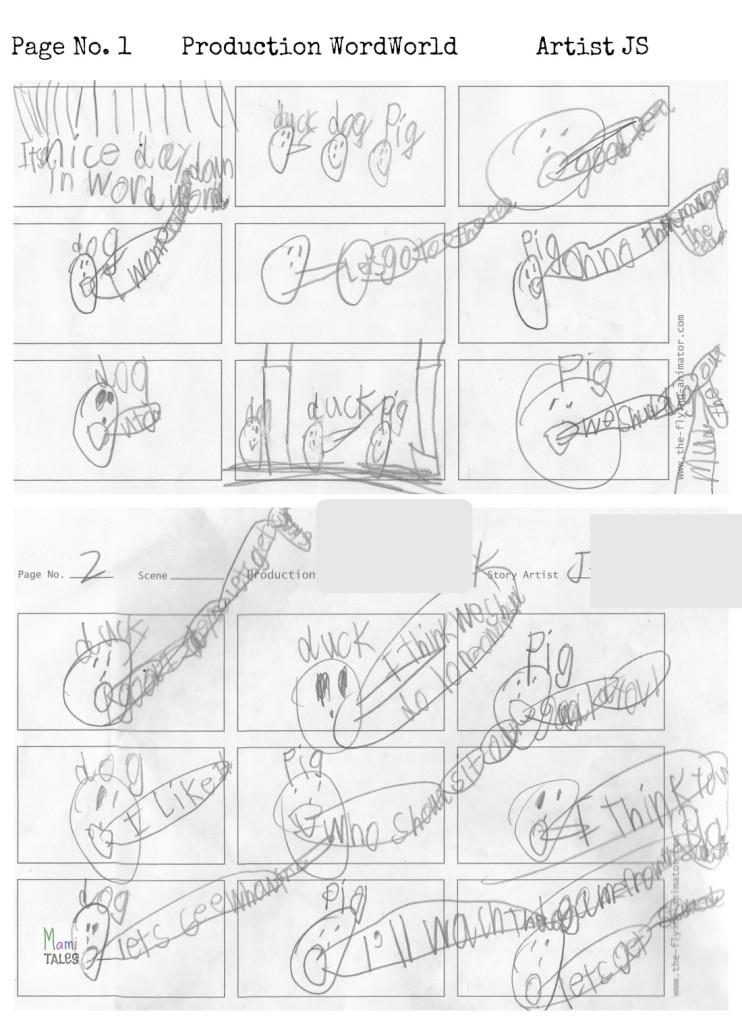 Last week I had told JS that he needed to pay more attention to the details in his story… I suspect he took my words to heart!

Miss I’s story is only a page long, and her Storyboard was too. Her story is about a Super Hero Couple called the Greens, who fight against trashing villains. 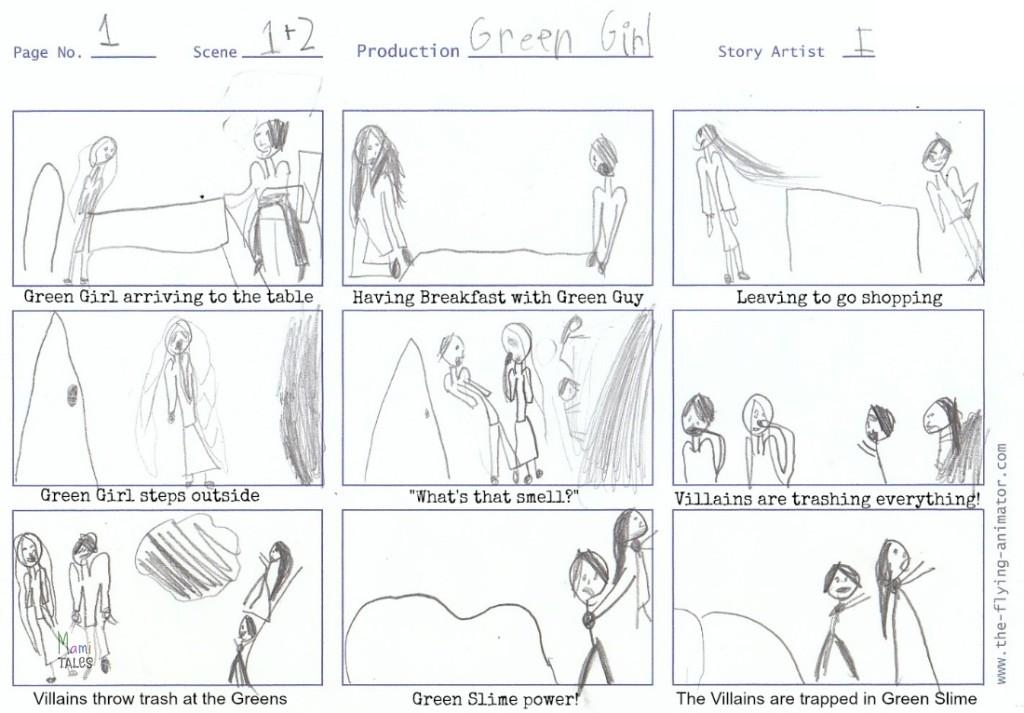 Last week I also told Miss I that she was getting lost in the details, and she needed to look at the bigger picture. Again, I think it shows to an extreme in the visualization she did of her film.

JH didn’t come to class last week, so he missed the structure vs details lecture… and his Storyboard had a lot more variation on sizes and movement. His is the story of a chase, where a hero runs after a villain and tries to capture him. He almost succeeds… but then the villain escapes and they keep the chase going. 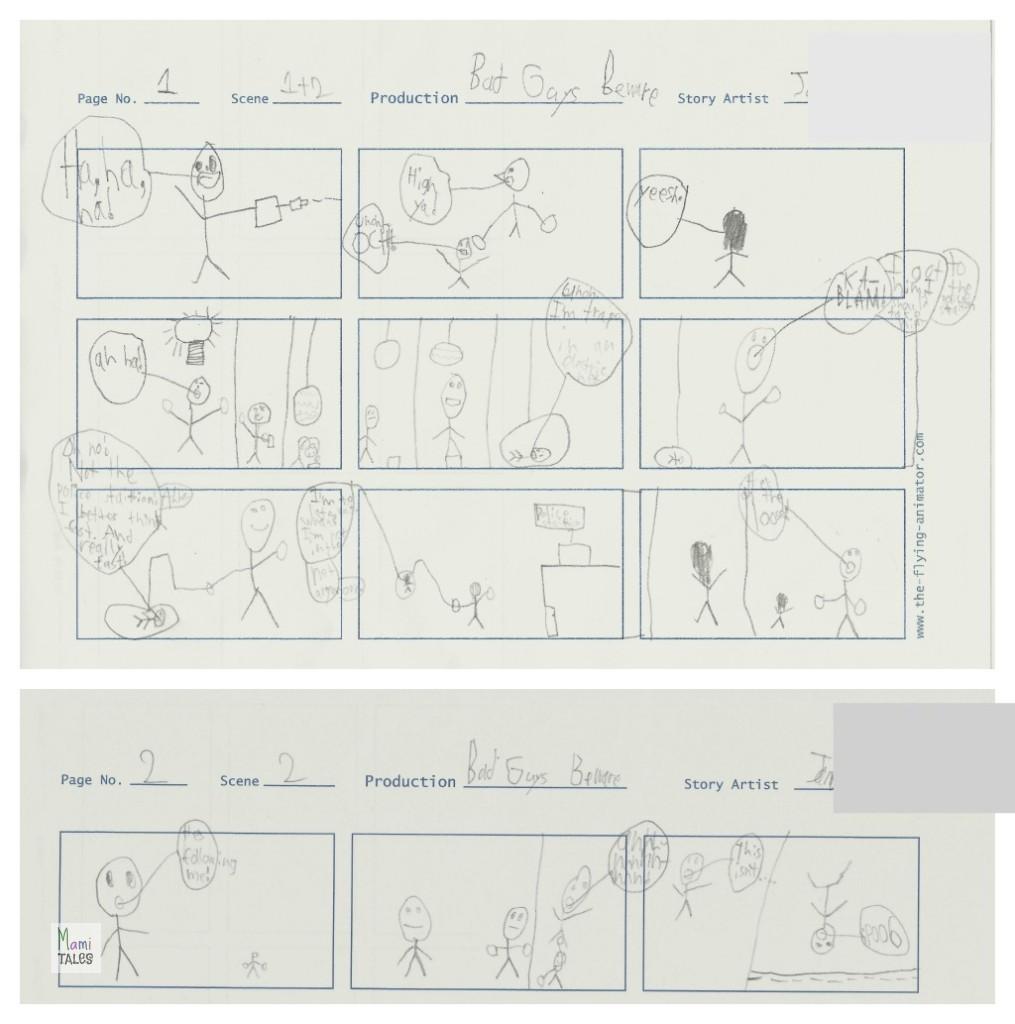 Mr. JH’s Storyboard was the most varied, combining different shot sizes and adding both detail and story in a visual way. He still needs to develop a little more variation on what his camera is seeing, but I’m sure he’ll realize about this once he gets the actual camera.

I believe that the best way to show them that they need to tell the story with a variety of angles, shots and movement, is by shooting their Storyboards in still photography. They homework was to bring the toys and props they need to shoot their stories. We’ll mount those pictures to the dialogue, and I’ll have them see the whole thing before they do a final pass at the Storyboards prior to shooting.

Film is a visual media, and learning how to tell stories with images is like learning a new language. I think they’ll be able to see themselves what is missing… should be interesting to see if the realization clicks!