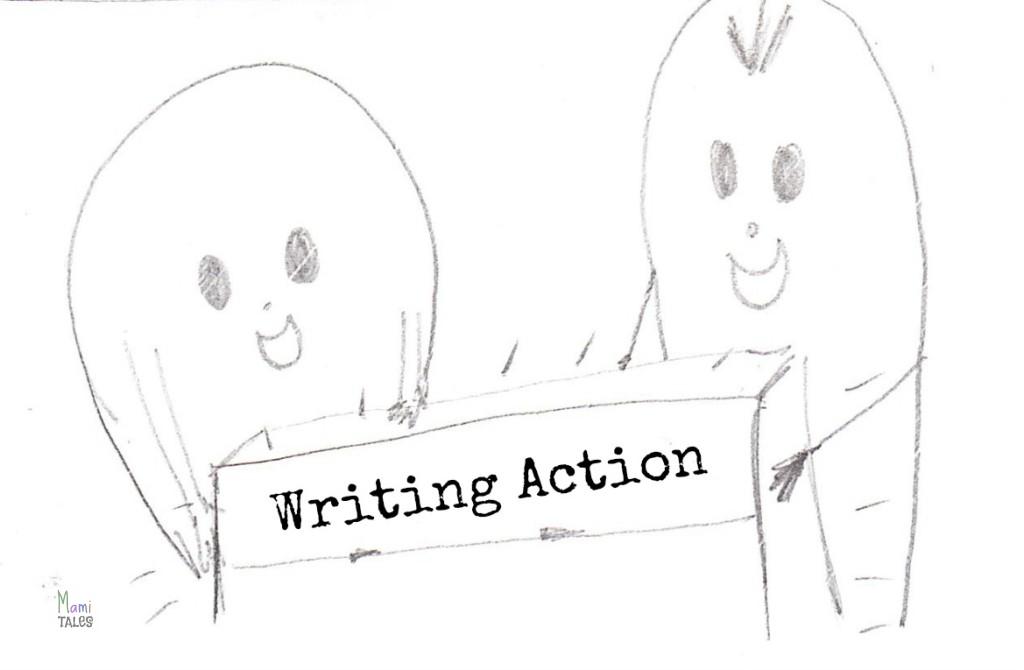 What is Writing Action?

Last week, on our Movie Class, we read the kids first approach to their stories. Their stories had a lot of the elements we had talked about before, such as a conflict, a somewhat clear story, and a beginning, middle and end. However, almost none of their stories had any description on what was actually happening. As they seemed to have trouble understanding what I meant when I asked them to add a description of the action to their scripts, I decided to start this class by teaching with an example. I drew a very basic story with no dialogue (with even more basic characters… I’m no artist, I know), and cut the story in individual drawings. I gave each of the kids a full set of pictures each, not in order, and asked them to put the story in order. Once they had the order down, I asked them to write down the story, describing what they were seeing in each one of those frames.

NOTE: The numbering or not was their own doing — they each chose how to write their story. I’m just transcribing what the kids did.

JS’s Surprise in the Box

JH’s Surprise in the Box

I.K’s Surprise in the Box

Two kids really don’t know what to do because it’s raining and can’t plan outside.The girl, Jolin, had an idea. Jolin tried to reach a box that was high up. Spiral, the boy, decided to try it. He couldn’t reach. He got a chair and got the box. There was a candy gumball maker!

So That’s What it is!

After reading all their stories, I told them that what they had done was exactly what was missing from their scripts. I went with them through their stories, asking questions on where their characters were, what they were doing, how they were doing it… JH was so excited he said he was going to write his script right after school the day after — it seems it finally clicked with him what I was talking about and he felt inspired and full of ideas. Miss I was laughing when I started giving her silly questions about the location and action of her characters: “Where are they?” Miss I, “In their house.” Me, “In the bathroom?” Miss I, “No!! Of course not! In the kitchen! They are having breakfast!” Me, “Where does it say that?” And then she got it. J.S. also got a similar situation like Miss I: Me, “Where are your characters?” JS, “Going to play football!” Me, “Where?” JS, “The Stadium! And then they find a muddy puddle!” Me, “How big is the puddle?” JS, “The size of the whole field!” Me, “And what exactly are they going to do to fix that and be able to play?” JS, “They’ll get construction workers, and a bulldozer and dig the whole thing up!” Me, “But then you have a whole cast of construction workers coming in now, that weren’t there before…” In the end I think they all got that it is very important to write on the page what they are seeing in their head. Let’s wait and see what they bring next week in their script writing action!

Worked in film and TV for several years before having my two wonderful children. Now I try to bring that creative input into my home to raise my kids. Hope you enjoy following this journey!
View all posts by Erika →
Tagged  Acting, Funny, Inspiration for Kids, Movie Class.
Bookmark the permalink.