A Kindergartner dealing with loss and grief 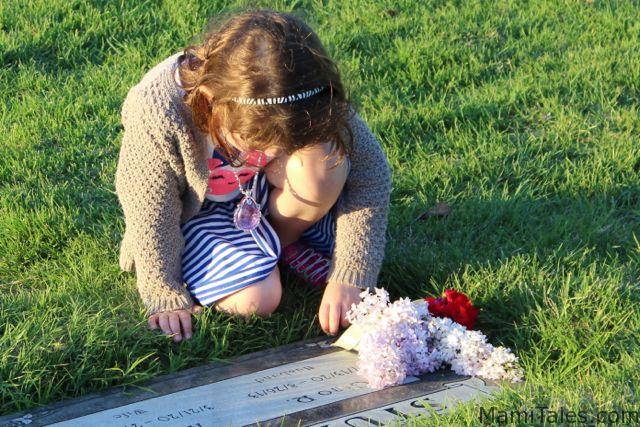 About six and a half months ago, a few days after Tiny Mr. A was born, we lost a very dear member of our family. He was an elderly gentleman (93!), but he was full of life and sharp as a tack until the very end. We lived very close by, and he was an integral part of our every day life: he’d come for dinner once a week, and every other weekend we’d go visit him at his house and have dinner together at one of the multiple restaurants that he used to visit every single day. For Little Miss I, he was her great grandp-uncle. It was very hard to lose him, despite the fact that he left the way we’d all like to leave: in his sleep, after a very full life. Little Miss I was sad to not have him around, and she cried a bit — but it never went past her saying: I miss him, I’d love to see him again. I’m sad to know I can’t see him anymore.

Lately she’s been learning more and more that you can talk about the way you feel, and that it is OK to let other people know about the things that bother you. It started with the episode at school of “Issa the ghost,” but we’ve been talking more and more about how she feels every day. Today, in the afternoon, she said she was jealous of her brother. We talked about that, and how the fact that I was not spending as much time with her (as before) was because I had to care for her brother too — he couldn’t do many things for himself, so I had to help him. Later on that turned into “Sometimes I feel like I’m missing something. Sometimes I have bad thoughts.” I asked her to tell me more about this, and she said she was feeling like she was having nightmares as daydreams, and that she was concerned with things like a very bad Queen taking over the world (she’s been trying to make sense of why Pharaohs had slaves, or why Cesar Chavez had to help the crop pickers). I dug a little deeper and asked her when she started feeling like there was something missing, and she said: “Like when you gave away the two Monsters Inc. pajamas my brother had (which she particularly loved). Or when my friend from school moved to another school and I can’t see her anymore. Or when my Great Grandp-uncle died.” I could see the tears welling up in her eyes. So I asked her if what was going on was the fact that she was afraid she’d lose what she loves most, and she said yes. And suddenly, the sadness and the realization of what it meant to lose her Grandp-uncle, finally hit her. I told her to cry it out, as it was important to let herself feel that sadness. Losing someone you love is a big heartache, and she hadn’t really grieved for him until now. Her dad also talked to her, and we both hugged her and talked to her before bedtime. She was concerned that something bad would happen, and she was afraid that it would. We told her that the most important part about life is to live it — fully and well. You can’t stop living for fear that something might happen to you or those you love. It seemed she understood, but she also said that she wished she were older, because then she would know how to handle it better (!). I told her that it doesn’t matter how old you are. To lose someone special hurts always the same. But for me, the way to keep that person you’re missing alive is to write about them, or do a picture, or a song. That way the depth and intensity of the emotion you’re feeling is imprinted in your work, and you can pay homage to the life and love you felt for that person. It seems she understood. She finally stopped crying. We promised her we would go visit her Great Grandp-uncle’s grave over the weekend and bring him flowers, and if she does it, the story she writes about him too.

Worked in film and TV for several years before having my two wonderful children. Now I try to bring that creative input into my home to raise my kids. Hope you enjoy following this journey!
View all posts by Erika →
Tagged  Child's grief, mourning.
Bookmark the permalink.