Treasury of Egyptian Mythology for Kids 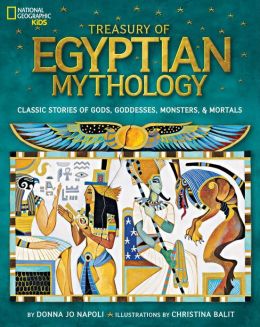 My 6 year-old has been in love with all things Egyptian for several years now. I previously wrote how her love for history and the Egyptians helped me steer her away from Disney Princesses and onto new interests. A few weeks back I found National Geographic’s Treasury of Egyptian Mythology, and I had to get it for her. I don’t know very much about Egyptian mythology, but the book’s images by Christina Balit were stunning. After reading a few of the stories for my daughter, I also enjoyed the way it was written, immersing young minds into the magical world of Gods, Goddesses, Monsters and Mortals. The text is rather advanced, though… so I would think ti’s better suited for older kids. The whole pantheon of Egyptian Gods and their connections are as vast and complicated as the Greek are.

I also found today an entry on Little Miss I’s journal about the Egyptians, so here it is:

This weekend I learned a little bit how to read hieroglyphics in the times of the times of the Egyptians. Pharaohs were spoiled, and they made the pyramids so they have a other life again. But since years, Egyptian people have been gone but the reason we know is because we send crews to find Epyptian history. Lif elog ago was very interesting. But slavery was horrible. They even made them work to death! And all Egyptian history is interesting. Archaeologists find this out.

Here’s a picture of the hieroglyphic writing.

My daughter is still fascinated by ancient cultures and wants to grow to be an archeologist (if she doesn’t become a violin soloist, in her words). All I can do for now is keep finding interesting books and information on the things that make her passionate, like this beautiful book on Egyptian Mythology for Kids.

Worked in film and TV for several years before having my two wonderful children. Now I try to bring that creative input into my home to raise my kids. Hope you enjoy following this journey!
View all posts by Erika →
Tagged  Book reviews, Inspiration for Kids, Miss I's Journal.
Bookmark the permalink.