Centopia, where my daughter is from 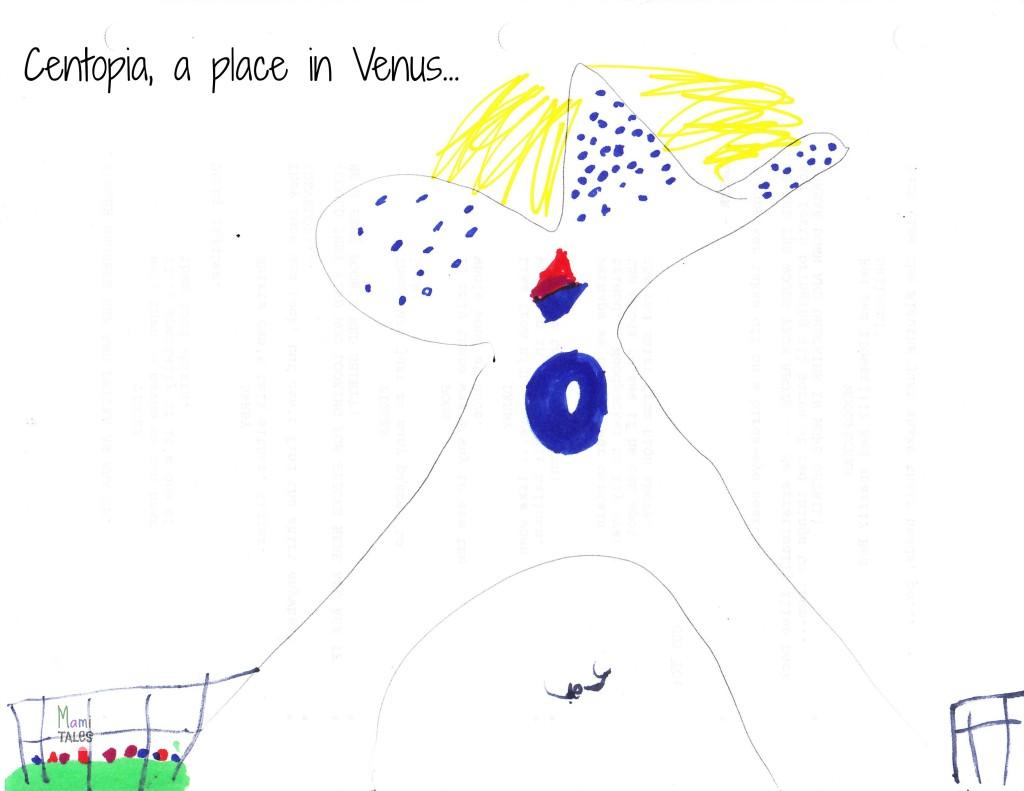 The first time I heard of Centopia, was when Little Miss I and her carpool buddy Mr. J were chatting away on the back seat. She claimed that she really was from this place called Centopia, and her friend said he actually was from Mars. I asked Little Miss I were Centopia was, and she claimed it was on planet Venus. She then told me the place had been destroyed, so she had to leave. But both her brother (Tiny A) and her were originally from there.

Every day, for a week solid, I heard more and more tales about life in Centopia vs life in Mars. Centopia was actually underground in Venus, where they had an extra sun and trees. In Mars, everyone played Minecraft all day. In Centopia, everybody is a carnivore… Little Miss I started writing her stories about Centopia and here’s the first part:

“Centopia was a beautiful place. There were plenty of orchards and berry trees. I used to play at Merry Park, where everyone would have baby showers, birthday parties or celebrations. Every house was ice and glass for protection.”

Yesterday she said that she had traveled all the way from Centopia as a little seed that I swallowed, then she grew in my tummy and was born as my baby. As my little fairy looks nothing like me, I don’t doubt that might actually be the case!

It was yesterday as well that I learned Centopia was not a figment of my child’s imagination… but the place where a Nick Jr. TV show she likes is set (Mia and Me, if you need to know). Ever since she had access to her own computer on her own time, I have had less control of what it is she’s actually watching. She has all sorts of locks and parental controls on the sites she’s allowed to visit, but I’m not so familiar with the content she’s watching anymore — all I know is that it is age appropriate, but that’s about it. I used to watch the shows she used to like, so we could talk about things that sparked her curiosity… but since Tiny A arrived to our lives, I tend to play with him as she watches TV, so he’s not in front of the screen. And it is also true that with homework and violin practice, Little Miss I also has very little computer/TV time every day. Nonetheless, I’m very much aware that what she sees, reads and likes colors a good part of her imagination (like marrying Centopia with ice houses, straight from Frozen).

As a film and TV writer myself, and having written for pre-k children too, I know it is impossible to keep our kids from pop culture, Nick Jr’s, Disney’s, etc… but what I’d done until now is balance all that out with a rich selection of picture books, movies, novels, museums and documentaries that can enrich her further and nurture her imagination without giving her images to go with the words she reads. I think we’re not doing such a bad job, as she decided a couple of years back to be Cleopatra for Halloween, and this year she will be Empress Josephine Bonaparte…

In any case, after I heard about Centopia and its link to a show, I immediately hopped on the web to find out what this show was about.  What do you let your children watch? Is there any show you absolutely avoid?

Worked in film and TV for several years before having my two wonderful children. Now I try to bring that creative input into my home to raise my kids. Hope you enjoy following this journey!
View all posts by Erika →
Tagged  Acting, Family, Inspiration for Kids, Reviews.
Bookmark the permalink.