In memory of my Grandmother

Today, I honor the memory of my Grandmother. Last Friday, October 17th, 2014, she passed away. She was 96, and she lived a full, happy life. My Grandma had been in poor health for the last few years, and since losing my grandfather almost 5 years ago, she was just waiting her turn to be reunited with him. 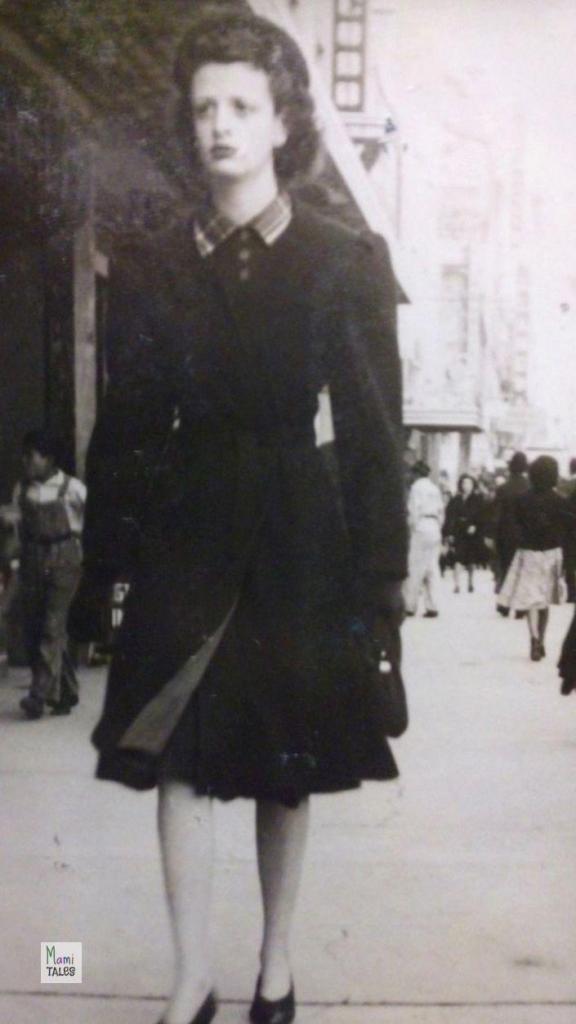 She was born in Guadalajara, Mexico, to a very large family. She had 10 siblings — and she probably didn’t have more than that as my Great Grandfather was ran over by a car when my Great Grandmother was pregnant with their youngest. A traditional good Catholic family from the turn of the 20th century. Once my Great Grandmother was widowed, the entire family moved to Mexico City (I actually have no idea why), where pretty much all of my Grandmother’s brothers studied architecture (and some became quite famous in the 60’s, I believe). Her full name, as she used to say it when she was little (or so she told me), was “Maria de las Mercedes de la Mora Palomar Negrete — y en la cola se le enreda un cuete (sic).” It kind of went something like that, and it was the type of sweet, silly humor my Grandmother had (the last part is roughly translated as: “and has a firecracker stuck to its tail,” as nonsensical as that sounds — and thanks to my dad for the correction on the quote).

My Grandfather was an architect too, and he studied with one of my Grandmother’s brothers. I can’t remember which… That’s how they met, and they got married later in life for that era (I think they were both closer to 30, if not a little over). As far as I recall, my Grandfather was a year younger than she was, which was also pretty unusual for the 50’s (NOTE: after reading this my dad corrected me, pointing out that my grandfather was actually 5 or 6 years younger, which is even more unusual for the era). They got married on October 29th, 1949. A year later, almost to the date, my Father was born. He was the oldest of three siblings: two boys and a girl. 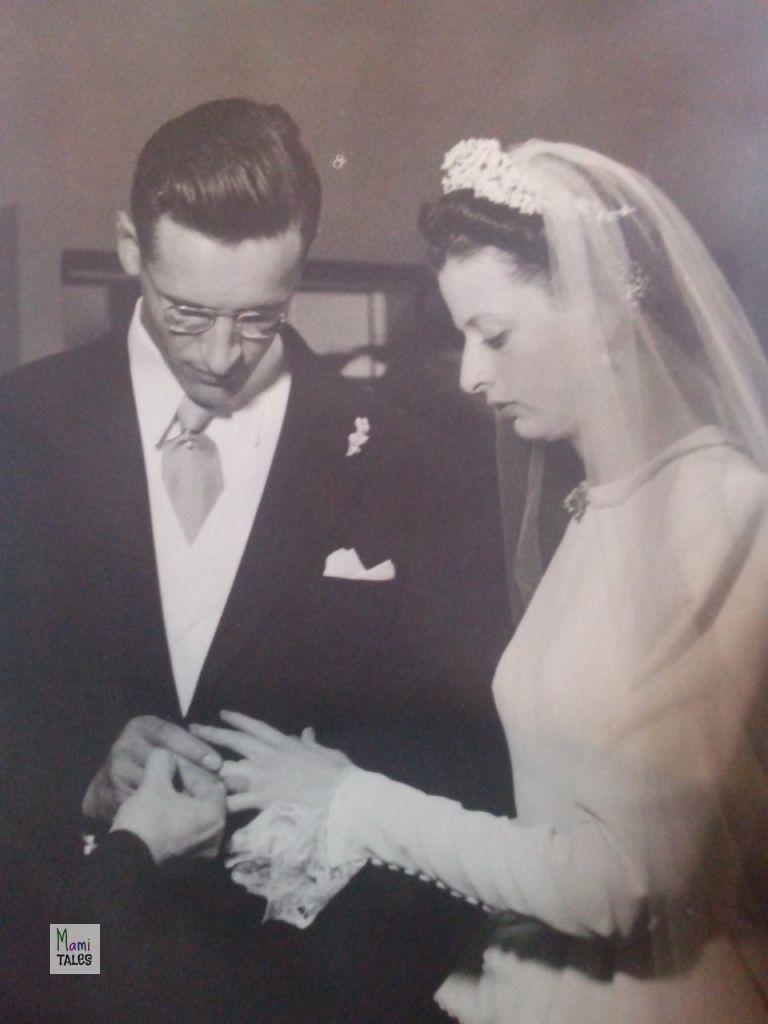 As I mentioned, my Grandmother and her family were very staunch Spanish catholic (from Guadalajara, nonetheless). My Grandfather was born in Germany, to a Protestant family. On their wedding day my Grandfather embraced my Grandmother’s religion, converting to Catholicism. Here’s another photo of their wedding, after the ceremony. 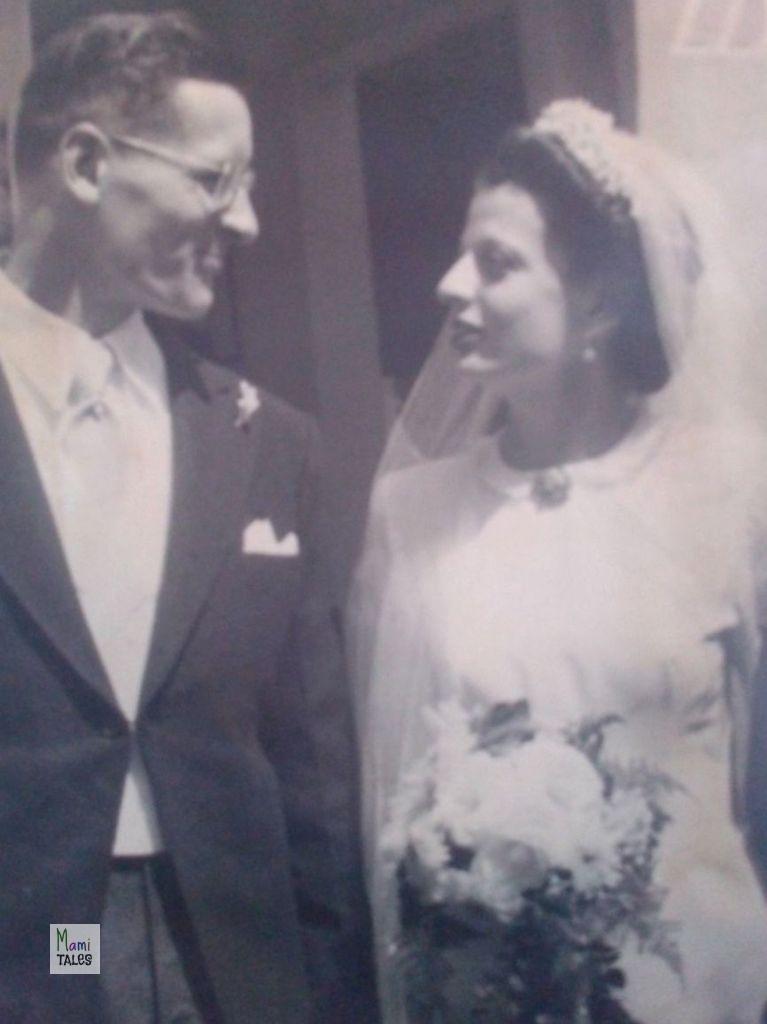 My Grandparents were a very loving couple. I always remember them being very affectionate to one another, holding hands, hugs and kisses. They loved having fun together, and would always share a laugh. Every year they would attend the church’s carnival dressed up as different things, which is one of the most clear memories I have of them. Once they were Minnie and Mickey mouse, I remember at some point they even went as “fallen angels.”  My cousins sent this picture of them dancing at the carnival in their later years, dressed as a men-women couple. My Grandmother would make both their costumes, always. 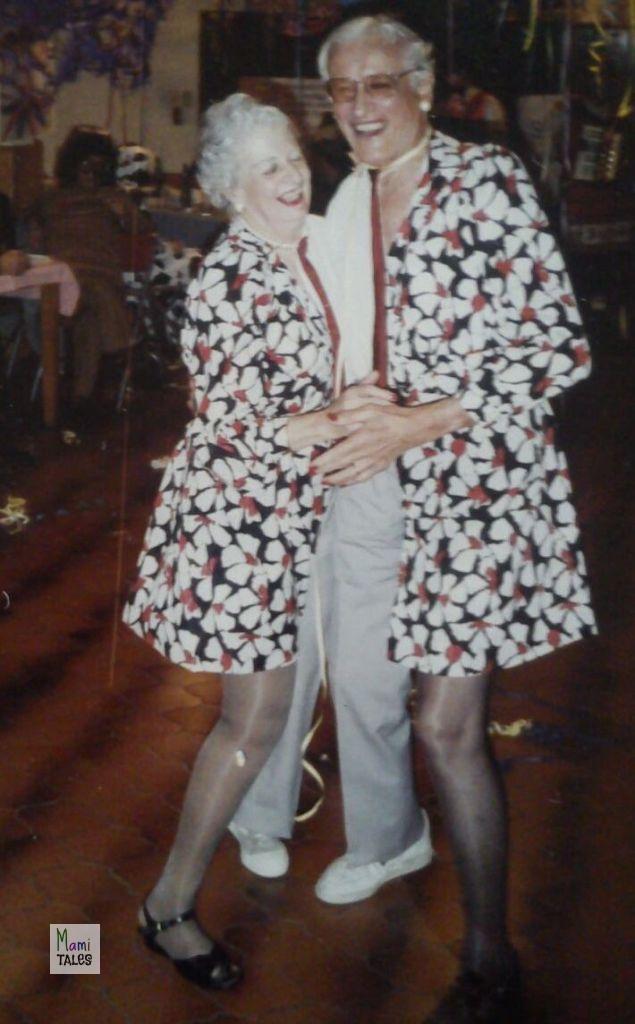 They were lucky to celebrate their 50th “Bodas de Oro” or Golden wedding together.

My Grandma taught me how to knit and sew. She was always loving and busy with something to do, either with a pair of needles or a crochet hook. My dad says that she was never quite good at it, as the sweaters were always a little too big or misshapen, but I remember how she could knit without even looking down at her hands. I’ve done several knitting projects thanks to her, and I had the fortune to show her several of the baby clothes I had done for my own kids. I also was lucky enough that both my children got to meet her, even if the younger one will probably not remember. 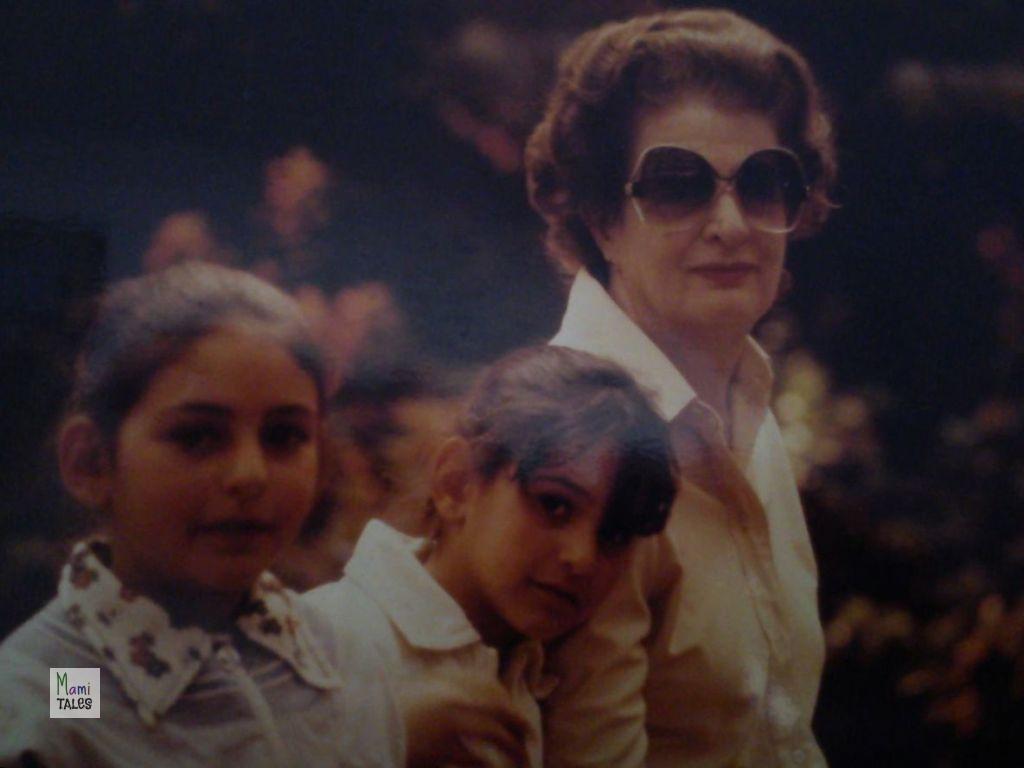 This picture was taken probably around 30 years ago. I’m on the far left, my Grandmother is on the right. 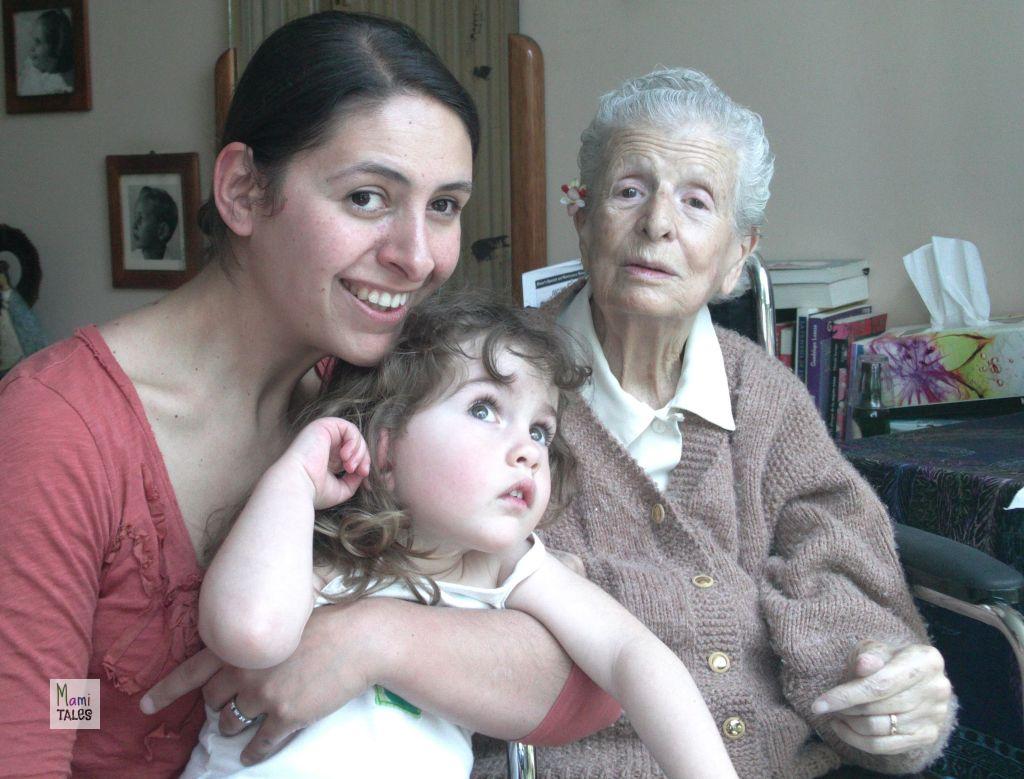 Here we are again, she on the right and I on the left, but with my little Miss I in between us.

My dad told me that on her last day, my Grandma had her breakfast as usual, then she closed her eyes. A smile came to her lips and she murmured: “Amor.” She then exhaled her last breath. I firmly believe my Grandfather finally came back for her, and now they will be forever together, resting in a niche at the Church my Grandfather built in Mexico City. 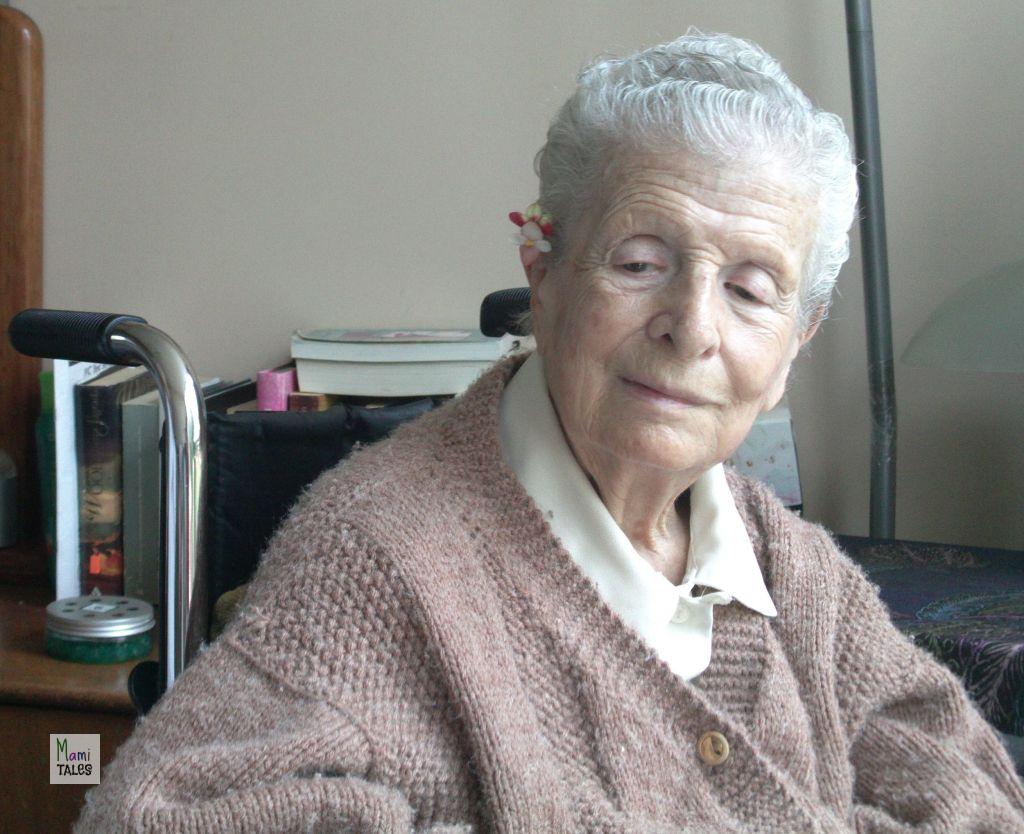 I miss my Grandma, but I can’t help but feel she’s where she wanted to be, and I respect that. She had a beautiful life, and she left a large family behind that will always love her and remember her and her legacy. Rest in Peace, dearest Muty.

Worked in film and TV for several years before having my two wonderful children. Now I try to bring that creative input into my home to raise my kids. Hope you enjoy following this journey!
View all posts by Erika →
Tagged  Child's grief, Family.
Bookmark the permalink.