Today, November 2nd, in Mexico we celebrate the day of the dead, or Dia de Muertos. It is a pre-Hispanic tradition that was adopted and transformed by the Catholic missionaries, so now the festivity has a lot of religious aspects to it. However, religious or not, it is a day all Mexicans celebrate, as it is all about remembering our loved ones who are no longer amongst us. We do this by making a shrine, either at home or at the cemetery, where we offer the dead flowers and things they used to like eating when they were alive. Then, on November 2nd, they come visit and join us to be together — not as a scary, Halloweenie type of way, but to remember and visit. The best way to describe this I saw in this Student Academy Award short about the Dia de Muertos:

I also watched with my daughter “The Book of Life,” which deals with the same idea on celebrating the departed, not fearing them — and also how the only way to really be gone is to be forgotten.

This year we lost my Grandmother, or as we called her, Muty. So we decided to give her and my Grandfather center piece in our altar, as she very much wanted to be reunited with him.

Here’s a picture of our altar this year. 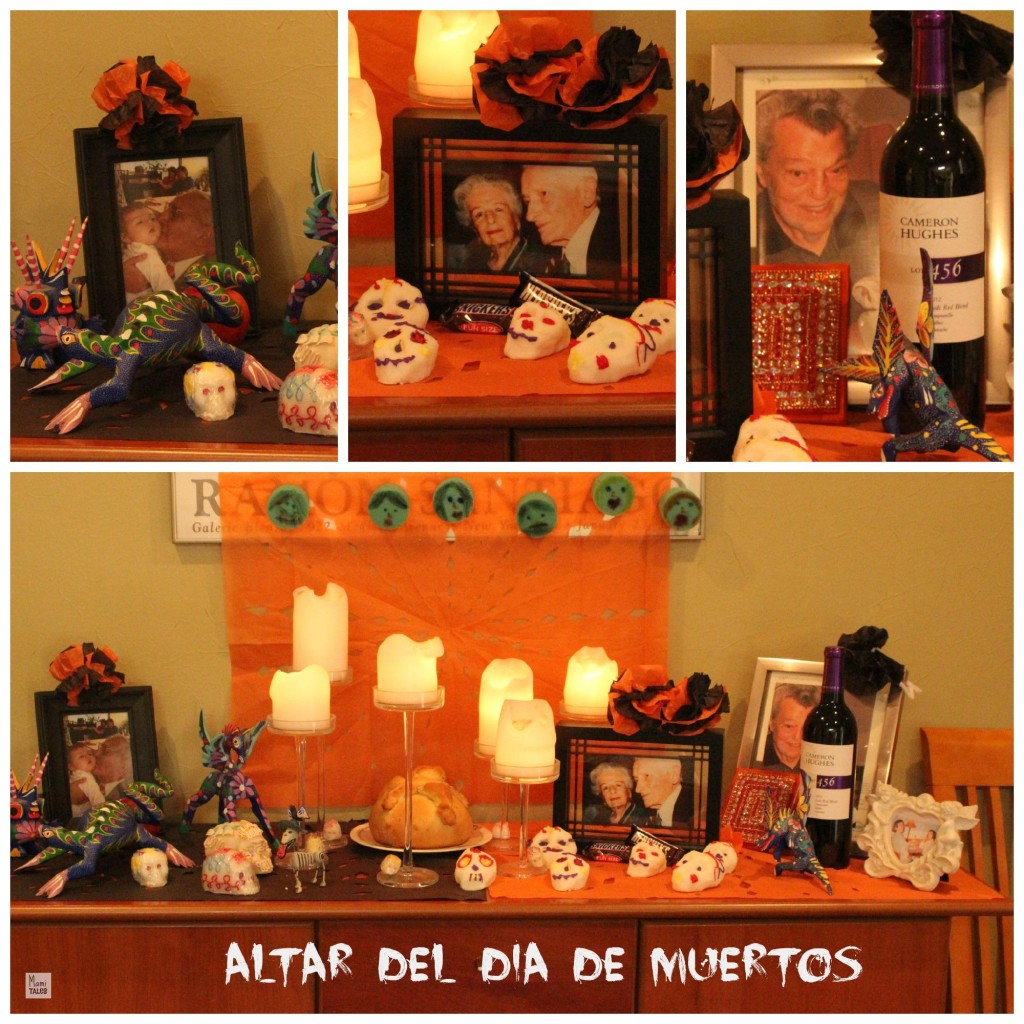 Little Miss I and I worked hard on making most of the elements of the altar together. We baked our Dia de Muertos bread, we made together Sugar Skulls (and also bought some at Olvera St. in Downtown LA), we did the papel picado and the Cempazuchitl tissue paper flowers. Little Miss I also found some green foam circles and decided to paint the faces of our honored dead in them. 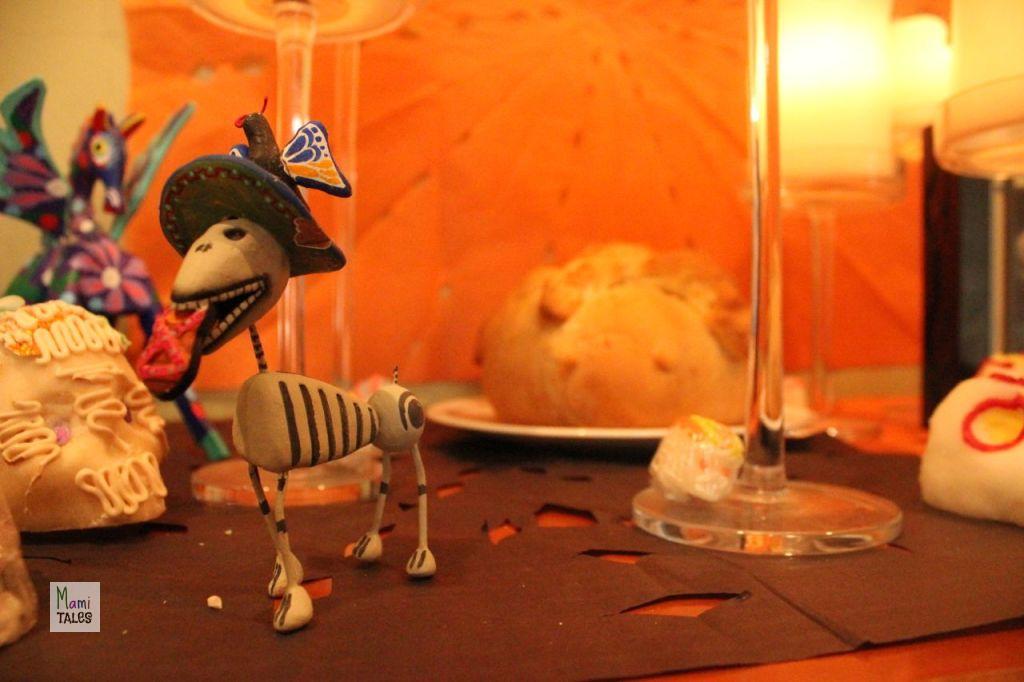 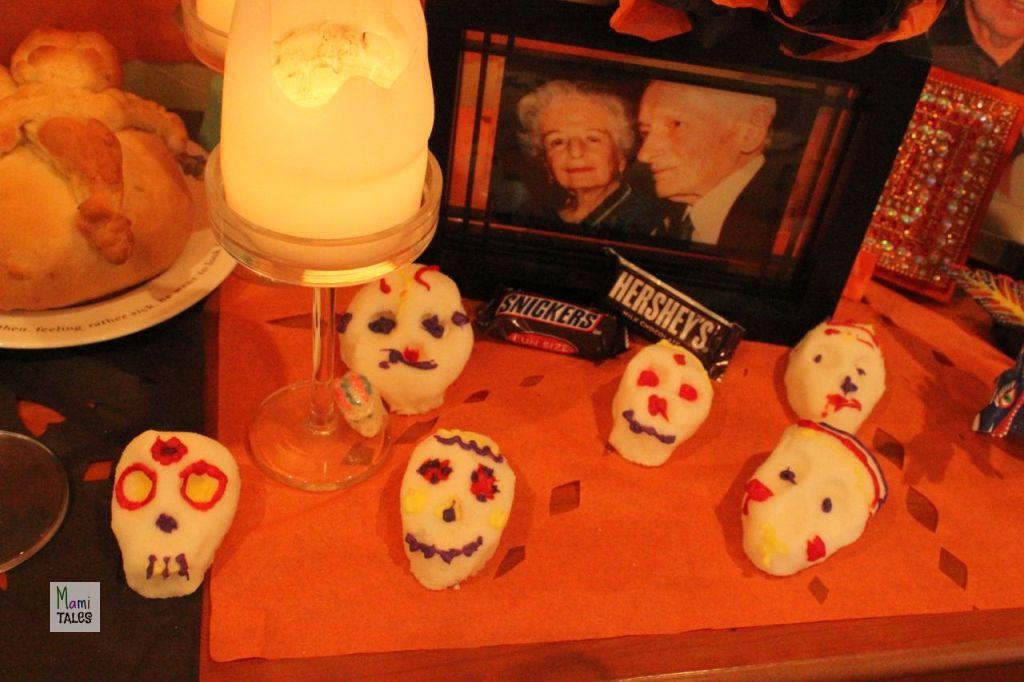 These were our home made sugar skulls. We bought the kit to make them (link above, but ended up modeling the sugar with our own hands, as the mold was impossible to use.

She also collected information on what their favorite things to eat were. For my Grandpa Armando we put an apple, as one of my clearest memories when I was a child was seeing him peeling apples with a pairing knife in a spiral without breaking the skin. For Mutty and Vaty we set chocolate. For Gino we set a bottle of red wine, as he was a collector in his latter years. 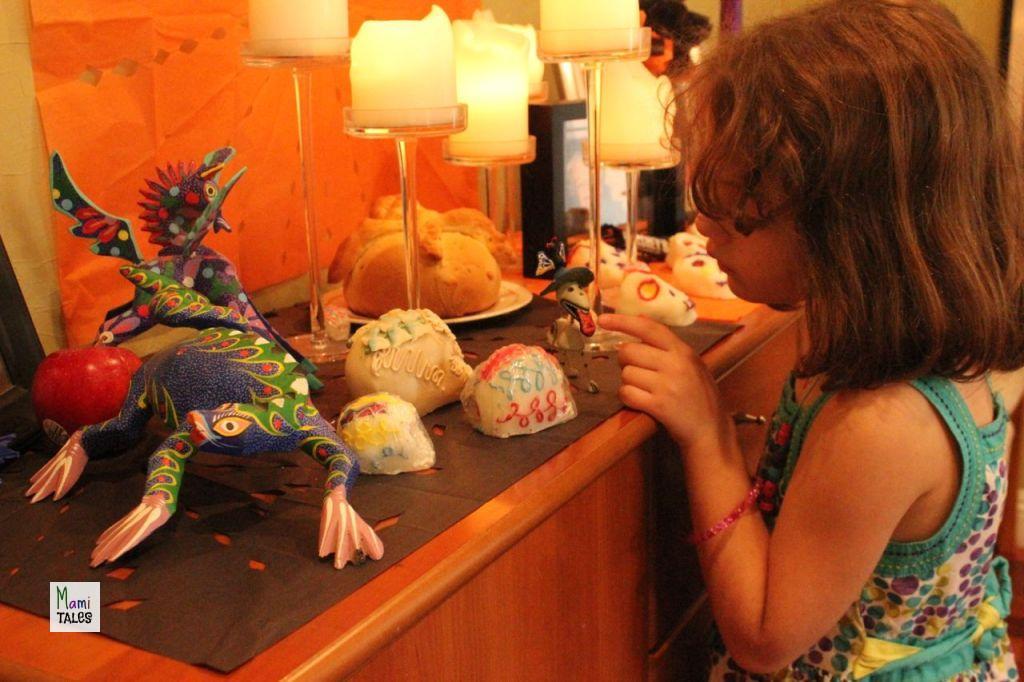 Having this day has been a great help for Little Miss I to deal with the loss of her great grandma. It is a beautiful way to teach her my traditions and also honor the memory of all those we love and have lost. Happy Dia de Muertos!

Worked in film and TV for several years before having my two wonderful children. Now I try to bring that creative input into my home to raise my kids. Hope you enjoy following this journey!
View all posts by Erika →
Tagged  Child's grief, Family, Inspiration for Kids, Mexican cooking, mourning.
Bookmark the permalink.