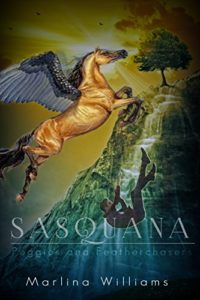 Sasquana: Peggies and Featherchasers, by Marlina Williams, is the story of 14-year-old Kellen, a shy teenage boy whose parents are about to divorce. While they are on a trip as the last attempt for his parents to mend their marriage, Kellen suffers a serious accident. However, instead of being rescued by his parents, he crosses a portal to a new world called Sasquana. This new place looks very much like earth, but in here all mythological and folk creatures are real: from Pegasus to yetis. In this fantastical world of Sasquana, evos (a higher version of men), animals and their habitat live in balance. Their biggest threat is the human race, forcing the evo race to prevent at all costs any human from finding the secret portals which lead to this wonderful land. Those who do, like our main character, Kellen, are forbidden forever to return to the real world. It is in this new world that Kellen has a chance to reinvent himself and gain the confidence he has never been able to have in the real world. Now, the biggest problem is that he’ll never be able to go back home to his house and his desperate parents.

Sasquana, Peggies and Featherchasers is a book full of magic. Author Marlina Williams has created a highly imaginative story where harmony is threatened by chaos and greed. I enjoyed reading this book because of the care and imagination with which Williams has envisioned Sasquana, as well as a careful development of the characters. However, the beginning of the story was too emotionally charged for my taste, and that unfinished conflict between Kellen and his parents took away for me to be able to delve deeper into the fantasy land once Kellen crossed the portal. That said, I like the fact that Kellen has a very nice character arc, in which he grows and learns about his own capabilities at the end of the story. The budding sexuality that happens with this adolescent character is interesting and well written, but places this story in an older category of readers, to my taste. I’d recommend it for teenagers, but definitely not appropriate for tweens. I look forward to reading where the series is going to go with the next book. 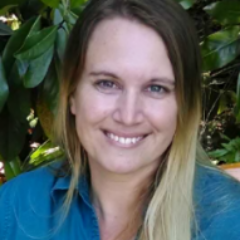 Marlina Williams grew up in a tiny town near Hot Springs, AR, after moving there from Lake Elsinore, CA. From 11 on she spent most of her free hours riding horses or cleaning stalls at a local thoroughbred farm. She joined the Air Force in 1996 and spent several years as an Airman, before becoming a contractor doing the same work. Marina now resides and works in Panama City, FL working as a GS civilian on Tyndall AFB. She lives with her husband, daughter, dog, and a mini horse – that thinks he’s a dog.

Worked in film and TV for several years before having my two wonderful children. Now I try to bring that creative input into my home to raise my kids. Hope you enjoy following this journey!
View all posts by Erika →
Tagged  Fantasy teen novel, Teen coming of age.
Bookmark the permalink.