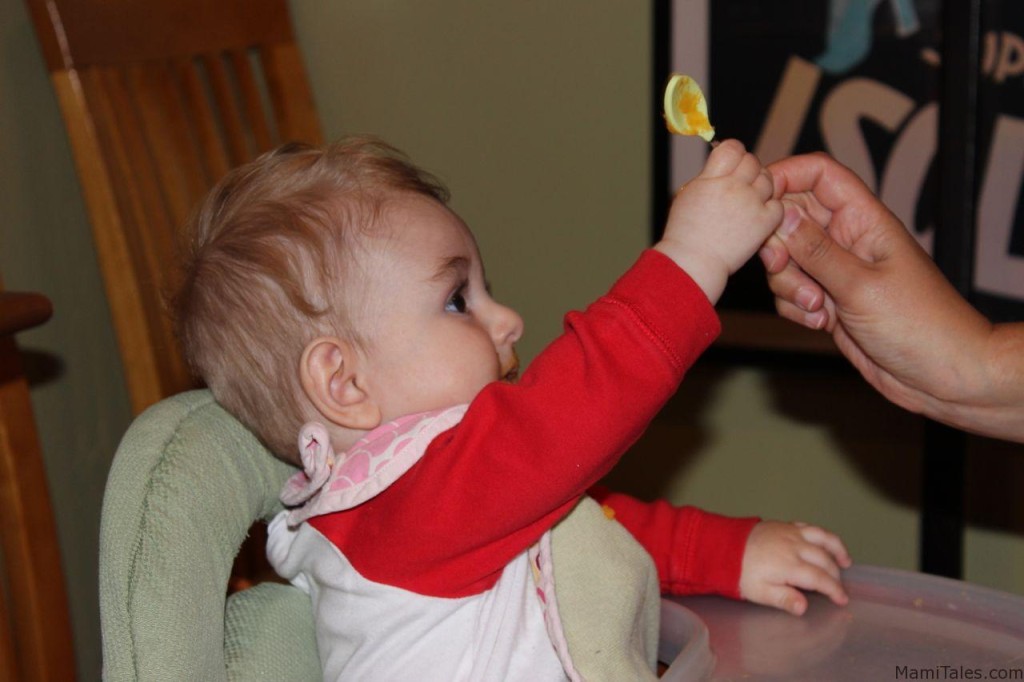 This is a continuation of my food making story. I started weaning Tiny A about a month and a half ago now, as well as documenting my experience with baby food making. First we tried bananas, rice cereal, apple sauce, pear puree… he was having misgivings on having a solid diet. He would have 2 or 3 tastes, then make faces or just plunge his chin into his chest and seal his lips tight — no food shall pass! I was frankly getting concerned. He didn’t seem to like solid food or other flavors very much at all. However, persistence has never been a problem with me, and I really wanted my baby to life food. And then we kept on trying different flavors, different textures, etc.

The first thing I noticed about Tiny A was the fact that he didn’t want to be fed. He wanted to handle the spoon and dictate the speed on which he was being fed. So I got a longer handle soft-tipped spoon and let him “help” ME feed HIM. I also realized he was beginning to react favorably to apple sauce and rice cereal, so I tried to give him more of that. And instead of defrosting two ice cubes of food, I started defrosting only one. I also got him finger foods from the store; little rice, oat and whole grains finger food snacks: sweet potato, sweet potato with mango, apple and apple with spinach. Having him being able to pick up his own food and taking it to his mouth did make a big difference. After that, he was more receptive to try different foods — even if it was me handling the spoon!

Then we found avocado. I mashed fresh avocado with a fork and fed him the mush. He LOVED it. He would smack his lips, then open his mouth for more. After much trying and testing, he’s come around now and now really enjoys sitting down and eating with us.  I start with giving him a little bit of whatever mush I’ve prepared for him, and after a few spoons of it I give him a little bit of finger foods. Then keep mixing and combining the mush with his finger foods.

I make my own purees, and I’m very glad I’m doing so! That way he gets to eat a very varied diet, which is not limited to what is available at the store. I also realized that he likes his food with more texture, and not so liquidy… so I can adjust that too. I literally only make baby foods once a week and then store the frozen cubes in the fridge. I can mix and match for different flavors and combinations, which gives a big versatility to baby foods. This is what we’ve tried so far:

I still haven’t tried egg, nor any proteins yet. That would be our next step! Once we do that, I’ll report back with the results.

Worked in film and TV for several years before having my two wonderful children. Now I try to bring that creative input into my home to raise my kids. Hope you enjoy following this journey!
View all posts by Erika →
Tagged  Baby food making, weaning to solids.
Bookmark the permalink.