What I learned directing my daughter

If you follow my posts, you probably know Little Miss I (my 6 year-old daughter) got cast as the lead character for the Spanish version of a Russian cartoon called Masha and the Bear. Ever since she got the part, I decided to write about what I learned directing my daughter. Last year I did the Spanish adaptation and directed the voice over recording for this show too. Back then Little Miss I was too young and her Spanish was not great, but this year she made a huge effort about improving her Spanish and finally landed the gig (the story on how that happened is here). On the date we were originally scheduled to record, she got sick and we had to cancel (the story for that is here), but this time around we were ready to go.

I got her an entertainment work permit, and sent all the necessary paperwork. A few days before the record date we read the scripts several times, and we studied the original clips of the show in Russian too. First and foremost I wanted her to learn the text, not so much the emotion behind it — meaning the inflections and intonations for each line or “acting”. I wanted to make sure she could pronounce each word clearly, as well as say the dialogue without getting stuck in some word. She kept trying to “act,” and I kept asking her to just read with no intonation. After a while we were ready to start working on the emotions behind the words, but again, I didn’t want to go very deep nor rehearse too much so that the freshness of her acting did not turn out to be stunted during the recording. She has a wonderful imagination and she’s very playful, but I also know that repetition ends up killing her spark.

Finally, the day of the recording arrived. After we left her brother in charge of his nanny, we headed towards Hollywood. In the car we reviewed the text for the a last time, repeating the words that were most difficult for her. We got there in time and she was very excited to receive a gift from our producer Marina (Masha for short): a plush Bear and a Masha doll; they both blurted out phrases in Russian when you pressed their tummy, and Little Miss I was delighted (she now even repeats the phrases in Russian, which is very funny to me). 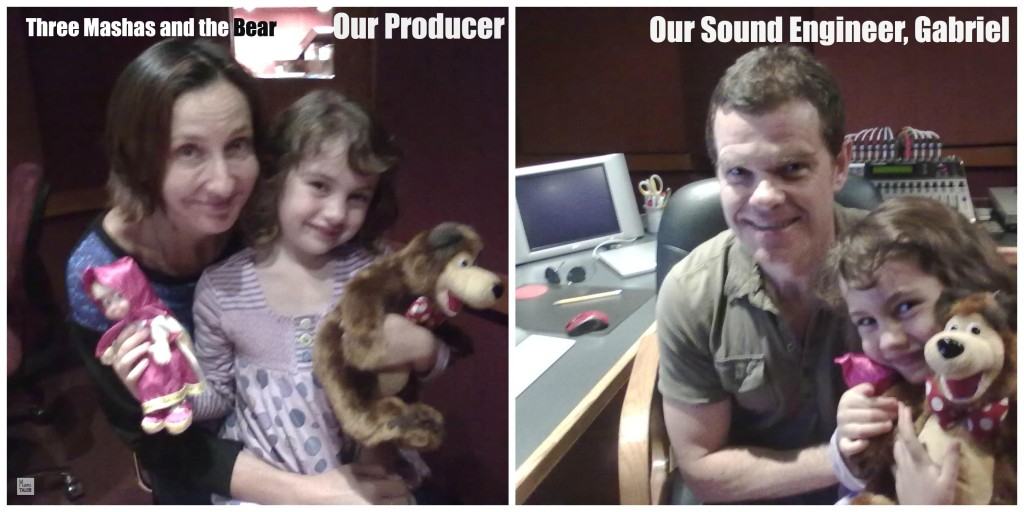 Gabriel (our sound engineer) checked levels, Little Miss I stood in front of the microphone, she donned her earphones and then… she got the worst case of stage fright!! She didn’t want to say anything, she didn’t want to see the screen and do her lines after the Russian original (that was NOT the way we had rehearsed), and she was just refusing to say or do anything. Period.

After attempting several different strategies (like trying to convince her everything was fine, that she was very well prepared and I’d help her along, telling her she was delaying everyone, saying that she had to make an effort), we finally stepped out and I told her she had made a commitment, she had to act like a big girl, and also that she was perfectly prepared to do the job. I also told her we had to get going, or otherwise she was going to lose the opportunity. That really made her react.

I asked to do a pass of the whole script once, just the way we had rehearsed. Then she clung to my arm and later to her new plush Bear, and little by little she warmed up. Over all it took a lot longer than I had expected, but she did fine and the result was really good. A few hours and two tea cups later, we were done. And she was very proud of herself. 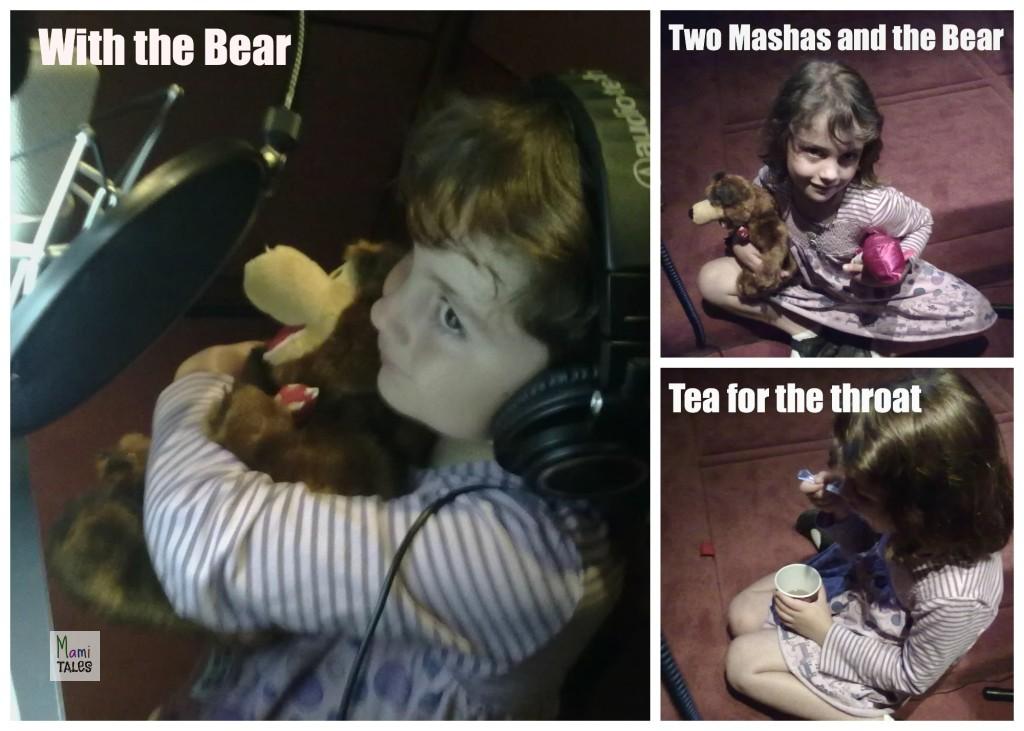 She was very playful, had no problem doing different voices or putting herself in the situation if I clarified it emotionally for her (for example, “Just imagine you were saying that to your brother, not the bear.” Or, “Say you were trying to make your daddy understand what you’re explaining”). Her biggest problem was with every time we decided to change a line because the timing on screen was not quite working with the lip flaps, or we needed to say things faster or slower. She has a wonderful memory and a fabulous musical ear, so any change really threw her off.

It ended up being a great experience and we both enjoyed it, despite its ups and downs… but what I learned directing my daughter more than anything else is that I’m first and foremost I’m her mom. Her happiness and well-being are most important to me over anything else. I’m incredibly proud of my little girl, and if we work together again, I’m sure now I have a lot more tools to help her be as at ease as possible to have a wonderful time. 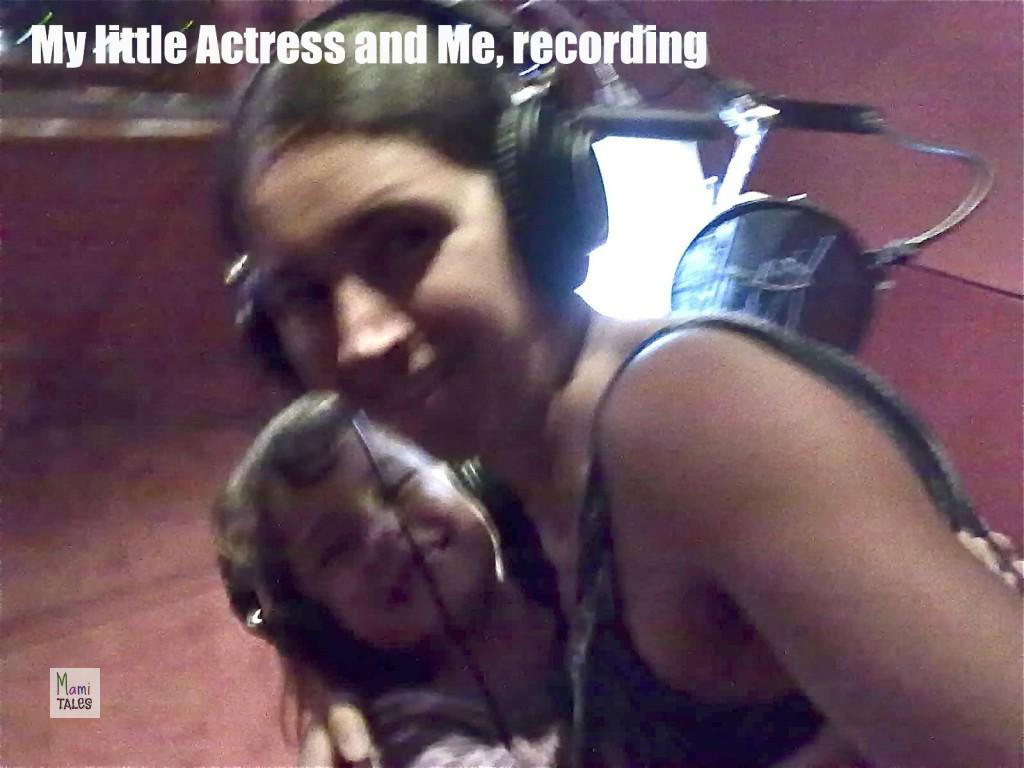 (please excuse my horrible cell phone pictures… between the darkness of the studio and my really bad phone, it’s the best I could get).

Worked in film and TV for several years before having my two wonderful children. Now I try to bring that creative input into my home to raise my kids. Hope you enjoy following this journey!
View all posts by Erika →
Tagged  Acting, Family, Inspiration for Kids.
Bookmark the permalink.