A trip back to the Victorian Era

This week in cooking and stories around the world, we made not only a trip to the Old Continent, but a trip in time too. As a lover of all things girly and dainty, Miss I loves her real china tea set, so I came up with the idea of making a Victorian Tea time and tales party for the girls. After much research on the type of cake we were going to make, the perfect recipe and the right storybook, we settled for a Classic Victoria Sandwich and The Victorian Fairy Tale Book edited by Michael Patrick Hearn.

Victorian tea time and its history

First, the story of tea time and how it came about. According to Food Timeline, the afternoon tea began with the Industrial Revolution, in the early 1800’s. With the economic and social changes brought by the Industrialization of the English society, the main meal of the day was moved from around noon to later in the day. So tea time became a sort of way to tamper the hunger at around 4. High tea was served a little later, and despite what the name might suggest, it wasn’t the “more aristocratic” version of tea time, but it’s exact opposite: high tea was called so because it was served at high tables where people sat on stools or just stood up to take their tea an a heavier version of sandwiches and finger foods buffet style. Anna, the duchess of Bedfort, is generally credited by food historians to have started the custom of tea parties in the 1830’s. Those reunions were between 3 and 4 PM, and there they served dainty sandwiches, little cakes and scones as well as tea.

Another point to mention is that at around that time, Baking Powder was invented, which allowed the creation of fluffy and buttery pastries. The Victoria Sandwich is one of the little cakes that was served back then. It’s called a sponge cake, but it really is more of a pound cake because of the way the ingredients are creamed and integrated. It’s filled with whipped cream or butter cream and (traditionally) raspberry jam.I looked at several recipes, until I found a wonderful article from The Guardian about a lady who had gathered the recipes from the heavy weights of the British cuisine and tried to make all of them, in search for the perfect one. I took her recipe and made a couple of modifications, the first one being that I wanted to make mini-cakes instead of a large cake… for which I used a cupcake pan. I have to confess I didn’t add the extra Baking powder nor the milk from her recipe because I simply forgot… but our cakes turned out light, buttery and delicious. Here are the cakes cooling off on the rack. 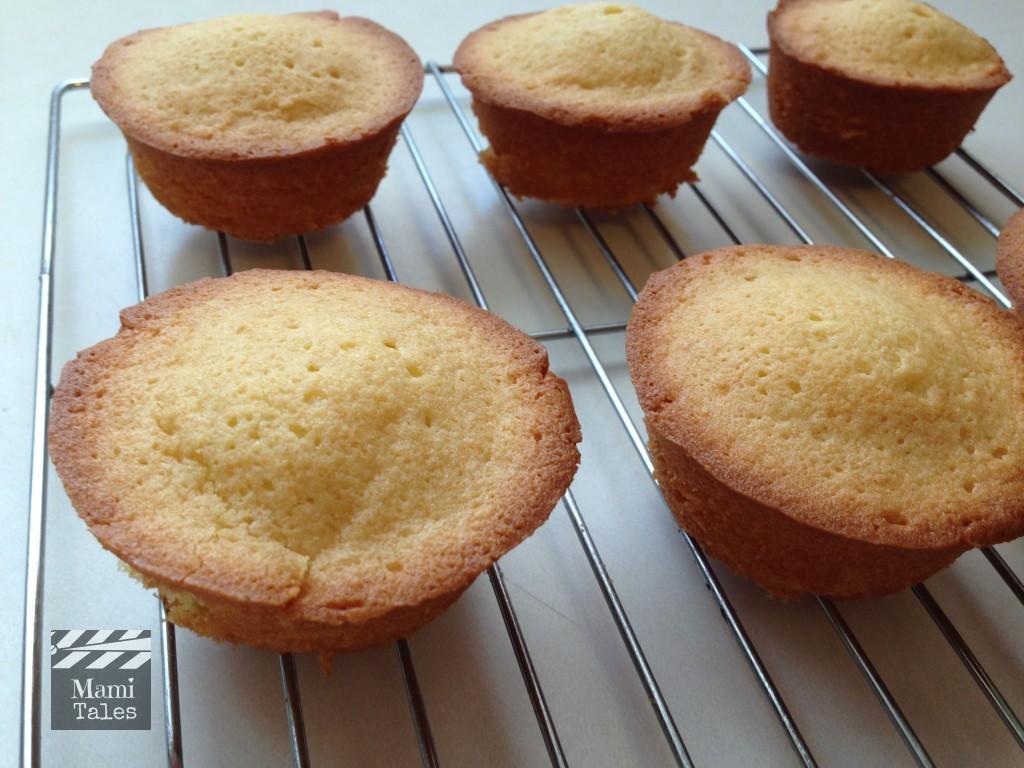 The most difficult part with my recipe was handling the dough, as it was very sticky. I managed using a pastry bag, and pouring the batter onto the greased cupcake pan.

For the final picture I used my daughter’s toy tea set, which they then proceeded to use and have their tea party with (along with some decaf English Breakfast tea). 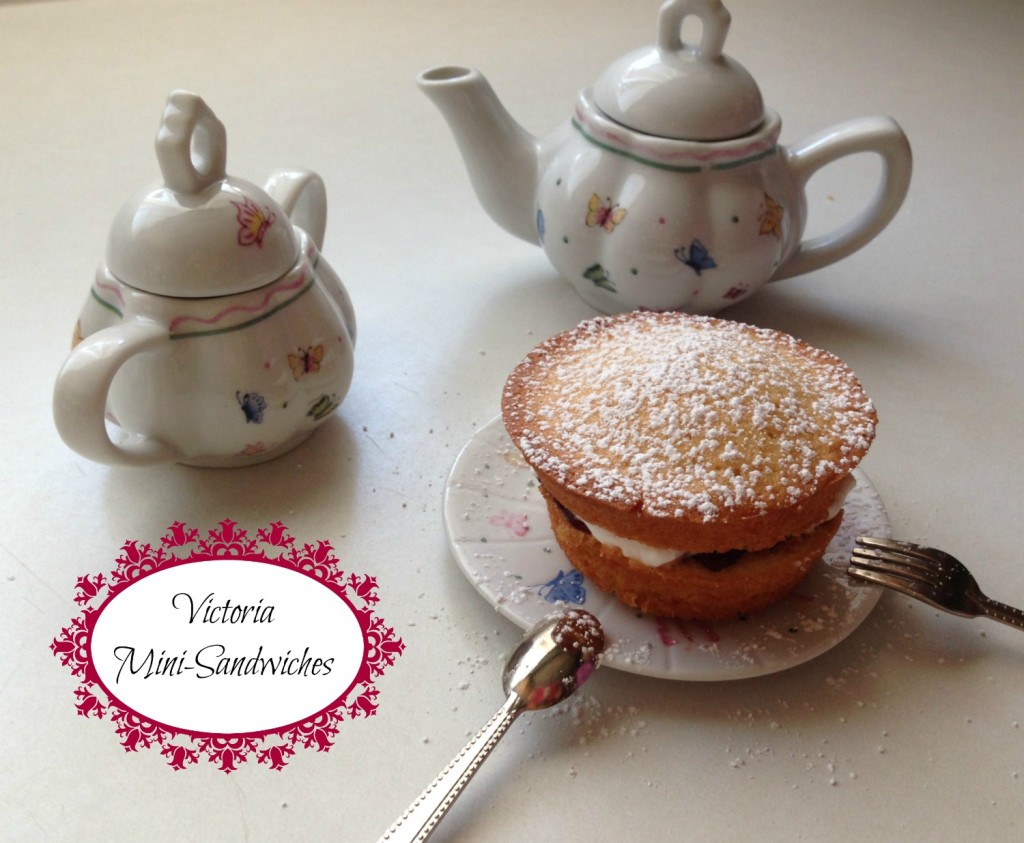 Towards the end of the 18th century, England had pretty much vanished the Celt and olden English tales and traditions, in favor of a staunch Christian morality. However, tales of fairies, giants and sprites flourished and continued in France and the court of Louis XIV, with most old stories gathered and retold by Charles Perrault, in Germany, with the brothers Grimm, and at the turn of the 19th Century with Hans Christian Andersen tales. However, artists such as Charles Dickens, were for the ancient traditions of the fairy lore. He actually was a friend of Andersen, and a big proponent of his prose. In 1839, as Queen Victoria takes the throne, the golden era of the British Fairy Tales begins. However, all these tales, new and retold, do hold something in common: they all are moral tales, where good and evil are clearly marked, evil is always punished and good prevails. The book I chose to review for this post is Michael Patrick Hern’s compilation of Victorian fairy tales, which has a fabulous Introduction that talks about the history and context of how the Victorian fairy tales came to happen. As he writes in his book:

The Victorian Fairy Take book does not pretend to embrace all aspects of this vast and varied genre. Instead, it includes only outstanding examples of imaginative fiction and poestry, several by writers who were among the greatest authors of their time. […] Some amuse, some enchant, some satirize, some criticize — after all, no one creates and alternative world who is content with his own. Whatever their authors’ intentions, these selections, reunited with illustrations from their original editions, display the abundant riches to be found in the Victorian Fairy Tale”. Hearn, Michael Patrick, The Victorian Fairy Tale Book” p. 23. 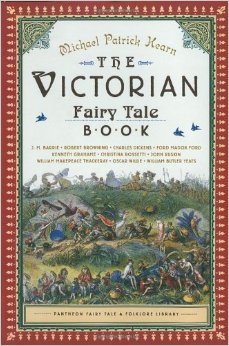 The Necklace of Princess Fiorimonde

One of the stories in the book is the Mary de Morgan, called by Hearn as one of the best writers of her time. This tale is pretty interesting, as the lead princess in it is a very evil and vain woman, who doesn’t want to marry so she won’t have to stop practicing sorcery in order to keep her beauty. It is, like all other Victorian tales, a moral story where the princess gets dealt a taste of her own wickedness in the end. I also found this tale available online through the Gutenberg project, and you may download it or read it by Clicking here. 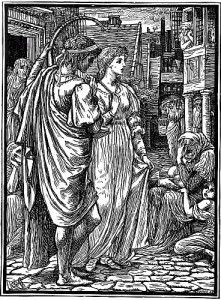 Hope you enjoyed our trip to the Victorian era! And now, with some Victoria Sandwiches and a good cup of tea, we’ll have our own Victorian tea party and read more of our wonderful book to go with it. Enjoy!

Worked in film and TV for several years before having my two wonderful children. Now I try to bring that creative input into my home to raise my kids. Hope you enjoy following this journey!
View all posts by Erika →
Tagged  Baking and Cooking, Book reviews-recipes, Cooking with Children, Desserts.
Bookmark the permalink.