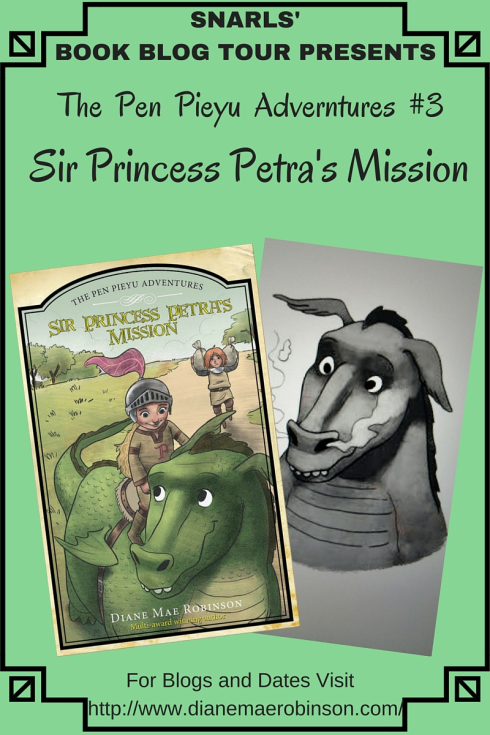 Sir Princess Petra’s Mission is the third book in the award-winning Pen Pieyu Adventure series. Petra is a strong female lead and her story involves several interesting characters, such as her steed, Snarls. Snarls is actually not a horse but a dragon. He is the dragon Petra conquer in book #1 to win her knighthood for her ninth birthday. Petra’s parent’s the king and queen, do not like having a knight for a daughter. They keep changing the kingdom rule book in order to stop their daughter. At each turn, Petra has been a competent match, thus far keeping her knight status. 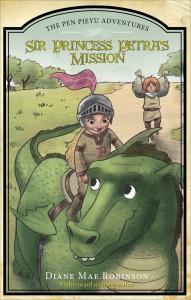 I was approached by Sue Morris from Kid Lit Reviews to be a part of this blog tour, featuring the third book of the Pen Pieyu’s series, Sir Princess Petra’s Mission. I had not had the pleasure to read this series before, so after reading the book I had committed to review, I did what I usually do when I like something: I had to go back and read the first two! Each book has its unique story and can be appreciated on its own, but reading them in order gives these fun adventures a much deeper understanding of the characters and where they are coming from. I love the fact that most characters are pretty zany and perfectly opposite to what archetypal characters on Princess and Dragons tales generally are: Petra, our main character, refuses to sit pretty and smile. She wants to learn how to fight, and discover new worlds, save problems.

As in previous books, this one opens with the King, Petra’s father, trying to device yet another strategy to withdraw Petra’s knighthood and make a “real princess” of her. This time the mission is to go find a Car-panther… whatever that mythological and scary creature might be. In the company of her noble fiery steed, Snarls the Dragon, and Bograt, a Bog Witch, Petra heads for this mission with all the bravery of the knight she has become. Using a fun grammatical device for a mix up, this scary adventure turns out to be a great trip into a magical world of elves. I also love all the little details and fun things that the series has, for example, the most horrific punishment in the Pen Pieyu Kingdom is to be put in a frilly dress. *Shudder*

I read all three books very fast. The humor, the imagination and the story are very fresh and unique. I gave the series in order to my 7 year-old daughter who read them all in three days. I had a couple of misgivings with things like food-fights in the stories, but my daughter thought they were hilarious. I’m so getting old! In any case, I would recommend this series to any young child who loves fantasy and humor, as well as alternative to bend the gender rules of the genre. Definitely a great addition to the list of Alternative Princess Books!

Some thoughts from my 7 year-old daughter

If the beginning of the book was erased, how would the book be different?If it didn’t have a beginning, I would say Sir Princess Petra cannot be a knight since in the beginning she did a royal deed and became a royal princess-knight. she began owning Snarls the dragon in the beginning so also she would not have a royal steed-cook. Apart from not having anything to do with what I’ve said, there would not of been a knighting ceremony.

Petra marched over to the royal rule book, flipped back to page 101, and traced her finger along the words until she found the segment she was looking for. “Well, Father, this particular rule, written by you several full moons prior, states: ‘All knights may choose their own steed. All steeds will willingly accompany their knights. All knights will stick together.’ And it has the royal seal of approval, which, of course, means you sealed it yourself and your new rule cannot alter a previous sealed rule.”

The king’s bottom lip sagged and twitched and looked like it might fall off. The royal councilman’s eye’s flashed open wide; he turned and ran.

As the king paced, he tugged at his grey beard, then stopped doing both and narrowed his eyes to glare his why-you-little-sneaky-princess glare at Petra. “How did you know exactly what page that rule was on? And how did you know you would have to find it? Have you been reading in the royal rule book without my knowledge? Have you been in my library?”

“Father, your library does not have a Private sign on the door. Anybody in the kingdom can go in there. That royal-sealed rule is in the royal rule book too, page 9,” Petra answered with a wink to Snarls, who was now standing close by her side, fidgeting and fiddling with his claws.

By this time, the queen had finally located her pocket mirror from somewhere in the tremendous folds of her gown, looked into it, screamed, and promptly fainted. The king plopped back into his chair, rubbed his scrunched-up face for a time before he raised his arms up in the air.

Petra already knew that meant, “you are absolutely quite right, my dear daughter.” She gave Snarls and Bograt the let’s-get-going signal with her thumb. Snarls scurried after her; Bograt went the other direction.

“You still have to do the mission part, you know,” the king called out after her. 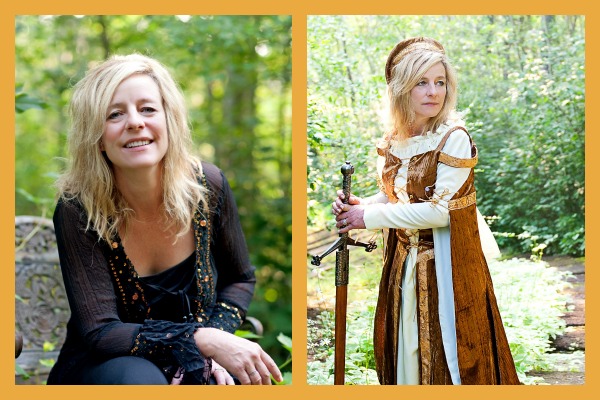 Diane Mae Robinson is a multi-award winning author for her series, The Pen Pieyu Adventures.

Diane Mae Robinson lives in central Alberta. She enjoys riding her horses, playing with her dogs, visual arts, visiting Maui often, and of course, writing. The author is also an art teacher, writing instructor, children’s book editor, and a judge in an international short story competition.

Worked in film and TV for several years before having my two wonderful children. Now I try to bring that creative input into my home to raise my kids. Hope you enjoy following this journey!
View all posts by Erika →
Tagged  Book reviews, Fantasy for tweens.
Bookmark the permalink.